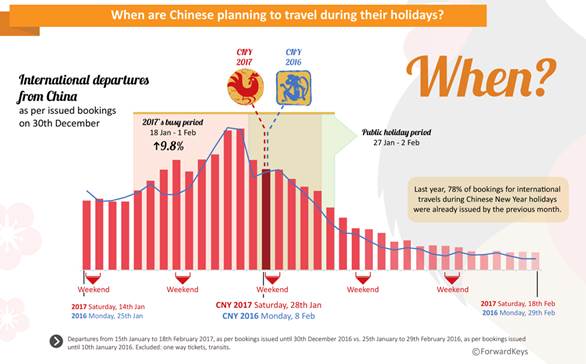 Chinese travellers are returning to Europe to usher in the Year of the Rooster, after numbers declined in 2016 likely over terror threat concerns, according to travel intelligence company ForwardKeys.

Although security concerns remain, bookings to Europe from the start of the Lunar New Year on January 28 were 68.5 per cent ahead as of December 30, 2016, compared with a 7.4 per cent fall in visitor numbers last year. However, ForwardKeys cautioned that the growth could have been due to bookings made at an earlier date than in previous years.

But when benchmarked against the equivalent period in 2015 before the impact of terrorism on European tourism, ForwardKeys found that bookings are still 56 per cent ahead.

Spain is the fastest-growing destination in Europe for Chinese travellers during the Spring Festival period (89 per cent), followed by the UK (88 per cent) and Italy (59 per cent). Despite suffering numerous terrorist attacks, France is ahead 49 per cent.

Central and Eastern Europe also see more bookings on the back of Russia’s popularity and Czech Republic’s improved connectivity. Turkey is the sole exception among top markets, lagging by 14 per cent as terrorism continues to hit the country.

ForwardKeys also revealed that overall number of Chinese outbound air travel bookings is up by 9.8 per cent for the January 18 to February 1 period. Departures are concentrated in the four days immediately before the 2017 Golden Week dates spanning January 27 to February 2, with an average length of stay of eight days.

Families of up to four people make up 51 per cent of Chinese travelling in this period. As well, travellers from first-tier cities – Shanghai, Beijing and Guangzhou – are more likely than those from smaller cities to travel beyond Asia (36 per cent) and use OTAs (26 per cent).