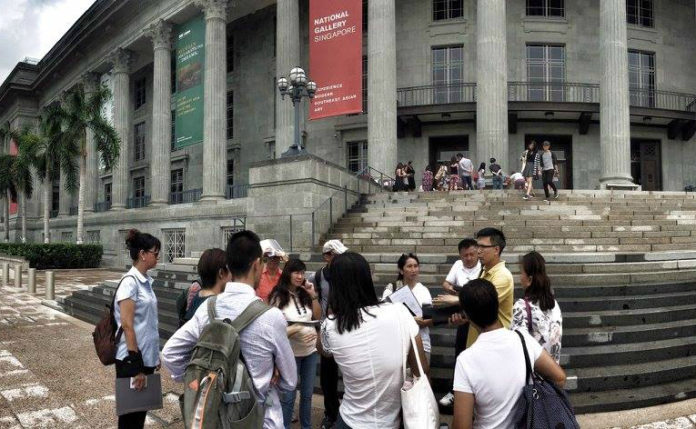 A Tribe tour group at the steps to the National Gallery

While much of it is the public domain, the Tribe team also tapped on sources who shared personal accounts of having travelled with Lee and his wife abroad, as well as on “so many people (who) stepped forward and offered to help for no reason other than to be a part of the research”, said Jason Loe, co-founder of Tribe.

The tour kicks off at Civilian War Memorial, then through Koon Seng Road for a taste of Lee’s Peranakan roots. Participants will also discover stories of his family home in Oxley Rise followed by a walk through Tanjong Pagar and The Arts House (the Old Parliament House). The tour ends at the former City Hall (now National Gallery) steps in front of the Padang.

The response has been “very positive” since the tour was launched, said Loe, who had expected the lesser-known aspects of Lee’s personal life to be of great interest to many, whether locals or tourists, young or old.

“We are seeing a good mix of people. Our youngest thus far is a seven-year-old and oldest is 82 years old. We have seen a broad spectrum of nationalities so far, but predominantly a local crowd. But that is a direct result of the wonderful coverage we have been getting locally. With the spreading of the word regionally and internationally now, we expect to see increased interest from abroad,” said Loe.

Tribe was registered as a private limited company in late 2013 and it spent 2014 putting together tours, building relationships with locals, writing and putting together the website. It was licensed as a travel agency in January this year. Asked how Tribe aimed to be different, Loe said: “Well for starters, we want to focus on the quality of inbound tours. So we looked at local experiences with fresh eyes.”

“Tribe is a community of locals providing authentic experiences that brings out the true flavour of a place. The tours are about you being a local for a day, making, rolling, tasting, feeling, smelling, asking and experiencing. Each experience is deeply researched to give you rich story lines that you will take with you to your next destination. At Tribe, we go back to the basics of ‘why we travel?’. We hope to ignite a sense of adventure and discovery to give you memories for a lifetime,” he said.