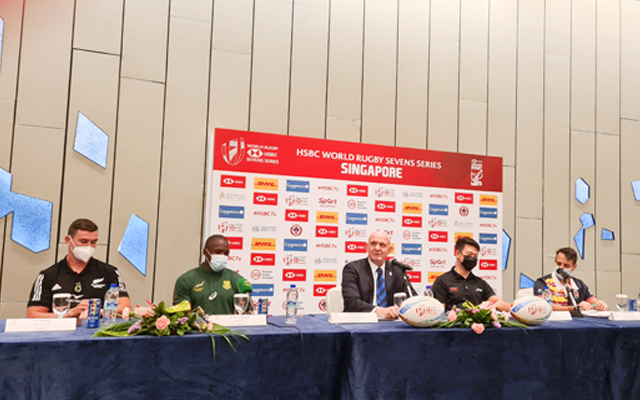 HSBC Singapore Rugby Sevens will be held at the National Stadium this weekend, with F&B consumption allowed in the stands and a range of entertainment lined up for all spectators.

“Singapore Sevens is an interesting one, and is truly a festival. Obviously, it is based around world-class rugby and we do have the best teams in the world competing this weekend, but it is a festival that involves everything fun for everyone,” Rodaway said.

He noted that Singapore Sevens is recognised as a “Family Sevens”, and earlier editions from 2016 to 2018 featured a variety of entertaining elements, from bouncy castles and games for children to live bands and movie screening.

More off-pitch entertainment and activities will be unveiled on social media over the coming days.

“If you’ve been to Singapore Sevens in previous years, you can expect the same essential elements this year,” he said, adding that important health and safety considerations will be implemented for the well-being of all participants and staff.

Singapore Sevens 2022 will be allowed to welcome 12,000 spectators into the venue every day, and everyone will have to submit a negative ART result before gaining entry.

Although ticket sales officially opened on April 3, short days before the event kicks off on April 9, Rodaway said 60 per cent of tickets have been sold, while The Greenyards Club hospitality booths have been wiped off the shelves. Six per cent of tickets are taken by people who held tickets from the cancelled events in 2020 and 2021.

“It just shows the strong desire among people to return to live events and interact with each other. The relaxation of travel and social measures fits nicely with the return of the Singapore Sevens,” he said, adding that there was a lot of curiosity over the commencement of the Singapore Sevens earlier on, with most of the questions being about F&B consumption at the event.

“F&B is a massive part of the Rugby Sevens, and an essential element (in the festival and entertainment promise). So, it is great that F&B consumption is allowed in the stands,” he remarked.

When asked about Singapore Sevens’ potential contribution to the revival of Singapore’s battered tourism industry, Rodaway said: “As we come through the pandemic, there is a real desire to get back to live events. The potential for rebound is actually stronger – people have been locked down and stuck in their country for too long, and they want to travel again. What better excuse for travel than live events?

“I don’t think rugby or the Rugby Sevens Series is the only motivation; any live sports will be a major draw for travellers to Singapore.”

Agreeing on the magnetic appeal of major sporting events for tourists, Doug Langley, series director for HSBC World Rugby Sevens, told TTG Asia that fans would travel to places to see their favourite teams play, “enjoy the party atmosphere that comes with the games”, and take a long weekend “to enjoy all the activities beyond the stadium”.

The Rugby Sevens Series also holds appeal for the expatriate community and locals, and brings “a strong economic impact” to the host destination.

The HSBC World Rugby Sevens 2022 has completed games in Dubai and Spain’s Malaga and Seville. After Singapore, it will proceed to Vancouver and Langford in Canada, Toulouse in France, London in the UK, and Los Angeles in the US.